This weekend in the Bodgers Group our three Raspberry Pi Pioneers teams continued to work on their projects.

The Zombie Herders were working on a PIR (passive Infra-red) sensor which is the type of sensor commonly found in burglar alarms. 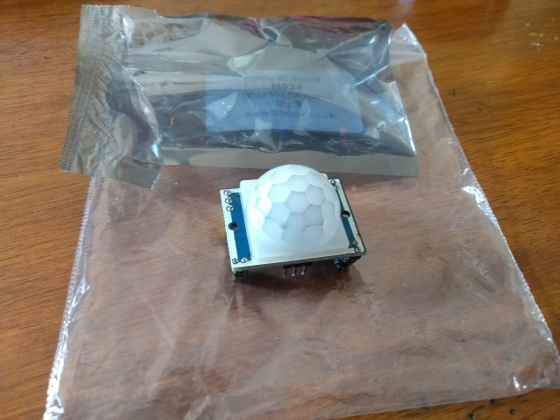 They used the GPIOZero library for Python and sample code which can be found here. However they didn’t have much success so we need to do more testing on our sensor and if necessary order a new one.

The zombie trolls worked on creating a 3-D model for their project using FreeCAD which they will print out when we return after the break.

I’m afraid I not allowed to discuss what it will be used for at this point :-).

Team Green Fingers worked on more scripts for their project including using their Arduino and a relay to switch a 12 volt automobile bulb on and off.

As with most projects like this we had a little trouble getting it going as we forgot to set the pin we used on the Arduino as an Output. Thanks to James and his Dad for bringing in the 12 volt powerpack.

We are off for the next two Saturdays and we’re back again on the 11th of November.

See you all then

Hope you enjoyed this weeks session and remember we are off for the mid-term and so our next session is on the 11th of November. 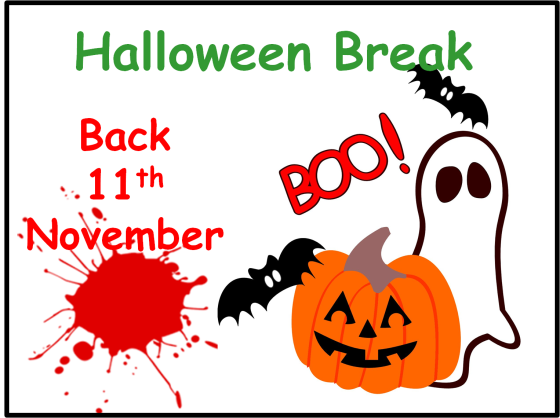 To get ready for the spooky season we created a Halloween Scene, lots of scary sounds and switching of costumes to create the effect of movement.

I chose a Witch with a wolf howl but I saw lots of great ideas as I was going around the room. Some had Ghouls, others Vampires, its was all pretty scary.

We also learnt a nice trick for giving the allusion of movement. We had a bat change both its size and Costume and it worked very well to give the effect of the bat flying towards us with the moon behind it.

Also if you want the completed Scratch Code you can download it by going on to the Scratch.mit.edu website login to the CoderDojo Account (details are in the notes) and search for CDA_Martha_Week06.

Hope you have a great Halloween, be safe when you are out Trick or Treating but have lots of Fun!! 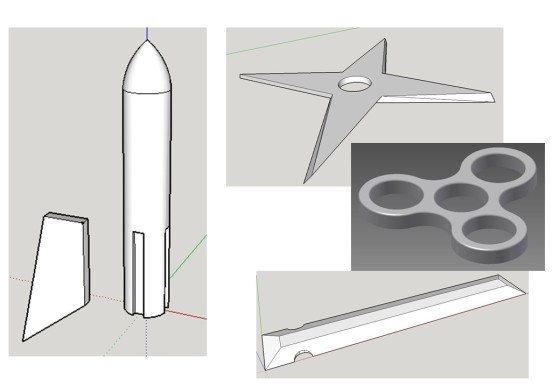 This week in the Hackers group, rather than demonstrating how to use SketchUo, we showed some models that Kevin/Michael had built (see above), and the challenge was to recreate them. Some people got so far as to be able to print their models.

We also started some planning on an overall theme – more on that next time.

Well! didn’t we have a very studious bunch of Ninjas last week, all very focused on our new game. Last Saturday we did a slightly different game to usual., There was no movement, no sensing when something happened. It was a Maths Game, a guessing game where the computer picks a random number and we had to guess the number. 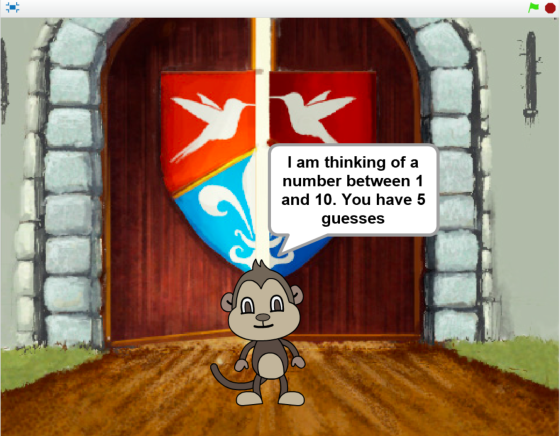 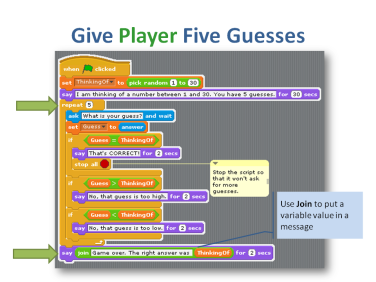 I hope you all enjoyed the difference this week and we are going try something else different next week. We  (You)  are going to create a Animated Halloween Scene. Get your Thinking Hats On!

Here are this weeks notes in PDF: CDA-S6-Week_05-GuessNumbers.pdf

This week we mainly looked at three things:

Most of us had heard of a hard-disk before. This is a stack of metal disks inside your computer. Each metal disk has a special coating made of millions of tiny magnets (like you might find stuck to the fridge) that can be turned on and off.

We also saw that the files on your disk are arranged with folders (also known as directories). Folders can contain both files and more folders. This allow us to keep our hard disk organised; without them all our files would be in the same place which would be difficult once we had more than a few. The location of a file is called its “path”. Looking at the highlighted file on the desktop of my Mac we can see the full path would be:

A function is a collection of commands that do a job together. We’ve already encountered them, even if you hadn’t especially noticed:

We could add all our code to start() and draw(), in fact, that’s what we’ve done before this week. That’s fine starting out, but it does mean, once there are a lot of commands in those functions, that our code is gets harder to read and understand. Breaking out a few commands into a new function and giving it a name that describes what it is doing, really helps.

Once we’ve written a function, it can be called as many times, and from as many places, we as need.

Functions can do one other thing too: they can give back a value to the place where they were called from. For this we use the special word return. For example, let’s see what a function to pick the largest of two numbers, we’ll call it Max(), might look like:

We give Max() the two numbers we are comparing. If the first one is bigger than the second, it gives back the first. Otherwise, if gives back the second. Note too that the names of the variables in Max() are different to those in start(), and that’s not a problem.

Finally, we looked at the P5 function random(). We used it two different ways:

As usual, all the code is on the creators github repository. Head there and download it!! The files for this week contain both the script we wrote (sketch.js) and a longer version that I wrote (sketch2.js). Feel free to take a look at both!

There was great excitement at this weeks session as the Pioneers teams opened their gifts from the Raspberry Pi Foundation. Each team member received a Raspberry Pi USB wristband, a Pioneers Lanyard, stickers and some sweets. Each team also got a copy of the Makers Guide to the Zombie Apocalypse and some zombie make-up.

We also got to see what was in our “Mystery Box” and I’m sure we are going to get great use out of it in future projects.

We then talked about the videos we’ll need a part of our entry and we had a look at a video from Pioneers on we need to put in our videos.

Then the teams spent some time planning out what they are going to do for their films.

Next week we are going to get back to working on our our projects. 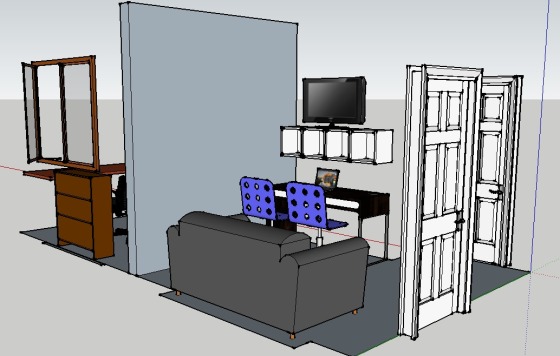 At this week’s session, Kevin introduced everybody to SketchUp, a free 3D modelling program. Models built with SketchUp can be exported to a format suitable for input into Repetier Host, to prepare them for 3D printing.

Incidentally, other options for 3D modelling include Blender (which some may have used previously for modelling) and TinkerCAD (which is web-based so does not require installation).

Here are some notes on getting started with SketchUp – they are taken from an NUI Galway summer camp I was involved in organising a couple of years ago: sketchupnotes

By the way, the picture above is a SketchUp model I built previously of a room.

This week our teams started coding their their projects for the Pioneers challenge.

The Zombie Trolls and the Zombie Herders started by playing audio for their Raspberry Pi projects using Pygame.

The green fingers spent the session trying out sensors for their Arduino based project like this DHT11 temperature and humidity sensor. They also got a soil moisture sensor and a float switch working.

We also got some great news from Twitter before the session. 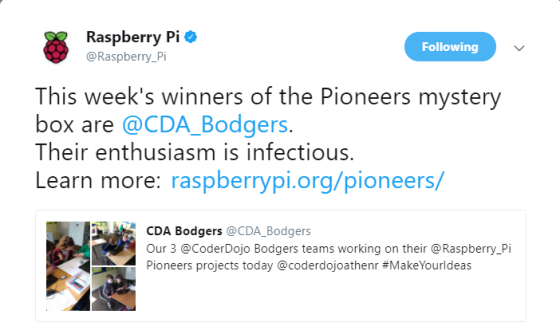 Here is a picture of the mystery box.

I don’t know what the mystery is, it looks like a cardboard box to me 🙂

See you all next saturday.

This week the creator crew learned some of the most important things for coding and we managed to build quite a useful app while we were at it! For those that missed this week, we handed out two sheets which … END_OF_DOCUMENT_TOKEN_TO_BE_REPLACED

Great week again with huge crowds but thanks to our new room layout and a couple of Health and Safety issues sorted, I think it was a more comfortable and safe environment for everyone. Thank you to Niamh, Sarah, Roisin , Alan and Pete you came early and helped sort out the new layout.

This week, I helped Bo Peep found her sheep! Some of you did the same and some used ideas like Minecraft Steve finding Iron Ore and Diamonds, Knights finding dragons or a Princess finding flowers.

Before we even started our game this week we talked a little bit about File Management and about the importance of keeping your files somewhere you can access them quickly and giving them a meaningful name.

So to this end, we all created a folder where we will be keeping our files in the future and within that we had a sub folder for this weeks files.

We started our game by drawing our background on our stage: 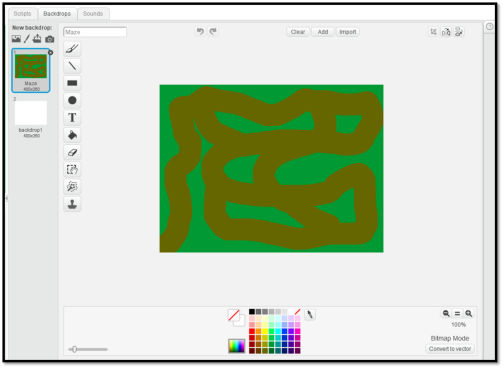 Rather than use the sprites from the Scratch Library, we searched the internet using a image search for our Sprites.

This week, we decided to move our main sprite using the arrow keys. For this we had to learn a small bit about the X and Y axis and I gave you a little tip on how to remember which is which!

Hope you all enjoyed this week, next week we have a very small bit to finish off for this game and then we will start a new game!