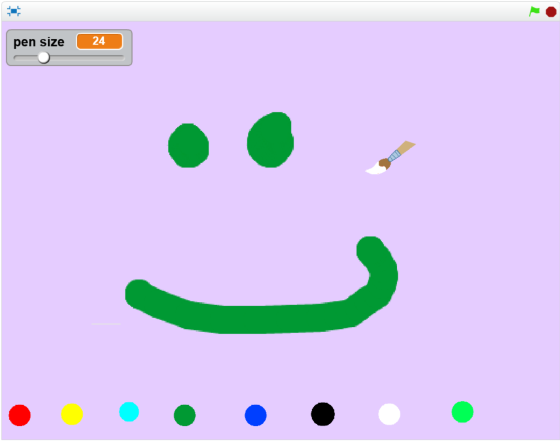 Hope you all enjoyed finishing up our drawing program. We made good use of costumes this week to make it look like we were dipping our paint brush in each of the different colours.

We also used a variable similarly to how we used in the Piano Game we made. We made it into a slider and then code select the Pen Size we wanted.

Here are the notes in PDF. CDA-S6-Week_08-Paint

See you next week for something a little Christmas themed!

What did we do? This week in the Creators, our code was full of bugs, but that was okay :)!  We created another project with classes and lists, this time creating an insect-like creature with a very simple mind – … END_OF_DOCUMENT_TOKEN_TO_BE_REPLACED

A Joule Thief is a small circuit that can boost the voltage from a small power source. Typically, it is used to power a 3-volt LED from a 1.5 volt battery. Because of how it works, it can continue to light the LED even when the battery would usually be considered to be “out of power”, when its voltage drops below 1v.

Here is a Wikipedia article. https://en.wikipedia.org/wiki/Joule_thief

people in the group found various tutorials online, such as this one from Make Magazine: https://makezine.com/projects/joule-thief-battery-charger/

Motor Control with an Arduino

Continuing our work on Project SABRE, we were figuring out how to control motors.

A simple way to control the speed of a motor is to regulate its input voltage. In Arduino code, you set the output voltage of pins. However, you CANNOT just hook them up to the motor, as it will draw too much current and damage the Arduino.

The solution is to use a transistor: power from a 9V battery or the 5V USB power supply from an Arduino powers the motor with current flowing through the transistor, and we regulate the current flow by applying an appropriate voltage to the middle leg of the transistor.

Two more components are needed: a resistor for the middle leg of the transistor, and a diode to get rid of any voltage spikes that come from the motor acting as a generator if it us spun by hand, or when it is spinning down after current to it is cut.

We also looked into stepper motors, and controlling speed by reading a value from a potentiometer, instead of just typing in a speed: https://www.arduino.cc/en/Tutorial/StepperSpeedControl

We were delighted to have Medtronic visit us on 18 Nov 2017 at CoderDojo Athenry. It really was a fantastic event, and very professionally organised by Cushla, Mary and the rest of the team from Medtronic, who gave out different-coloured wrist-bands to divide our large ninjas into groups who could view the demos together.

The team set up a great range of demos:

We are very grateful to Medtronic, and in particular our mentor Declan Fox, for organising such a great experience for our ninjas!

I don’t have any new notes from the Bodgers group as everyone is still preparing for the Zombie apocalypse. We will be filming the projects for our entries to the Pioneers competition next week so we will have a longer session than usual, we will finish at 3:30pm.

Here is a link to the experiment I was demonstrating for the Medtronic visit. In this video they use sandwich bags to make the valves but you can also use the straight part of a balloon or fingers from disposable gloves.

Here are instructions on how to make the stethoscope Malachy  demoed.

See you all next week,

No notes this week, I will wait until we complete the game this Saturday.

Hope you all enjoyed the visit from Medtronic, we really appreciate the volunteers coming out to see us and showing us all the really interesting and exciting things they do….and the lollipops were lovely too. 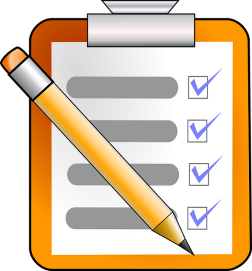 A plain variable in JavaScript can store a single value, we’ve seen that loads of times:

An array variable in JavaScript can store more than one value, just by putting them in square brackets and separating them with commas:

The code here does the exactly the same thing as the block above it. See that a now has two values in it and we use a[0] to get the first value and a[1] to get the second. This technique isn’t super useful when we only have two values, but the more we have to store, the more useful this gets. Imagine if we had 10 values,  how much shorter would the array version be?

You can also create an empty array and put values in it later:

In the code above we create an empty array (nothing between the square brackets) and then use the push() function to add two values into it.

A class is a programming concept that lets you define objects which contain both Properties and Methods. Properties are values associated with the object. Methods are actions that we can ask the object to perform. 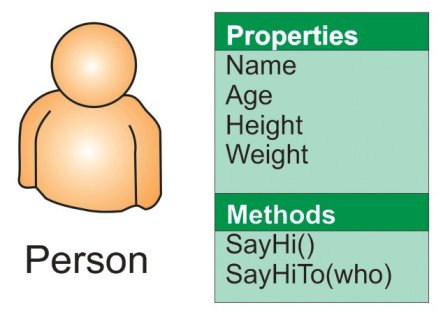 Think of yourself as a Person object and imagine some of the Properties and Methods you might have.

Your Properties might include Name, Age, Height, Weight, etc. A simple Method you might have could be SayHi(). That would make you say “Hi, it’s <Name>!”.

A method might have arguments, so it could be SayHiTo(“Dave”) which would make you say “Hi Dave!”.

Making classes in JavaScript is pretty easy. Let’s look at the Person class we showed above:

We say “class“, the name of the class and a pair of curly brackets. Inside these brackets we have three functions (but notice we don’t have to say “function“).

Let’s look at the first of these, called constructor(). This is where we set the class properties. Note that we must put “this.” before properties to distinguish them.

The second two functions, SayHi() and SayHiTo() aren’t too usual, again note that we must use “this.Name” to get the value of the name property.

This week we created a class to represent a bouncing ball and we saw how easy it was, once we’d created the class, to make several of them, all bouncing around simultaneously. This would have taken us a lot more code to do if we hadn’t made a class. As always, the files can be downloaded from our Github page.

This week we took a closer look at one of the most useful commands in javascript – the for loop!.    We first used a for loop to first generate a grid of circles: Next, we made a slight change to … END_OF_DOCUMENT_TOKEN_TO_BE_REPLACED

Thank you all for coming again this week and I hope you enjoyed the Halloween break.

This week we did a simple Piano. 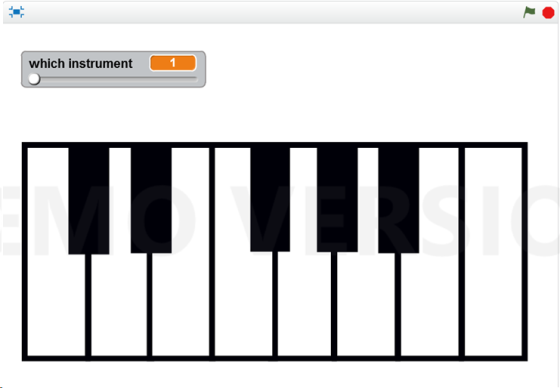 We only had to draw two keys, and then could duplicate these and change the names. The same applied to the code. The code is the same for each key apart from one small change so the note is the appropriate for the key.

REMEMBER! You need to make four changes each time you duplicate:

Change the name of the spite to the next Note

Change the name of the TWO costumes 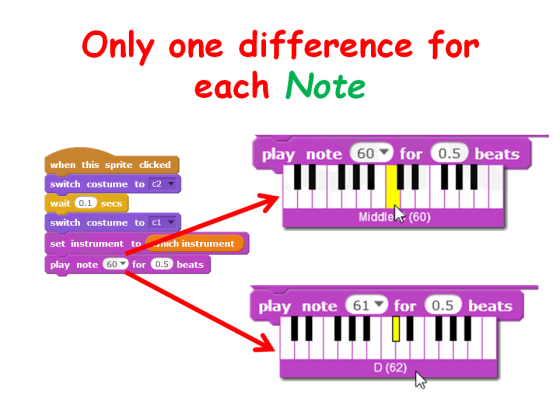 Here are notes from this week in PDF CDA-S6-Week_07-Piano.pdf 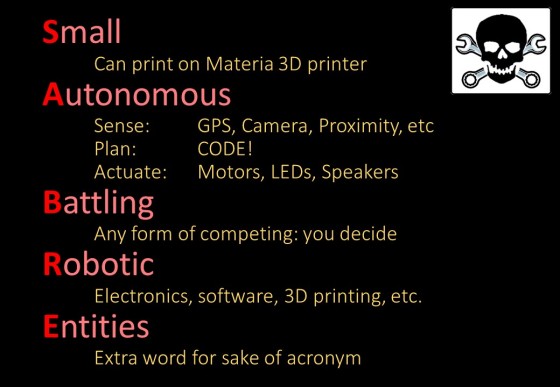 In the Hackers group, we started working on design of semi-autonomous or fully-autonomous battle-bots.

We are using the name “Project SABRE” as described in the graphic above.

Members of the group took first steps in learning how to control a robot by setting up a controllable circuit for LEDs.

This should be an interesting project to return to after the break!