This week we did our last iteration on Shootah and added a Bomb to be dropped by the enemy to try to hit the player.

We copied the existing Bullet class and called it Bomb instead. The main changes we had to make were:

It happened that the code we had already written to manage bullets was already perfect for managing bombs as well.

This was enough to have bombs move, draw and be removed when it becomes inactive.

We added a new function to Ememy called shoot(). In that function we generated a random number from one to two hundred. We then dropped a bomb every time that number was less than five (we tuned this small number to get a good rate of bomb drops). This meant that the enemy dropped a bomb at random intervals, to make it impossible for the player to anticipate.

The files for this week can be found on our GitHub repository.

An important point about this project was to show how transformations add up together. Transformations include translations (moving in straight line), rotations (turning about a pivot point) and scaling (changing size). We’ve used translations and rotations for our robot.

When we translate, we move the origin to somewhere else. This is handy for a few reasons but if we are performing rotations. All rotations happen around the origin, wherever that happens to be at the time.

This diagram shows all the transformations we use for our robot: 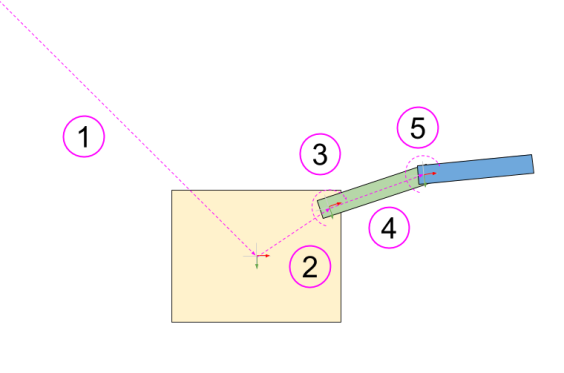 Because these transformations stack up on top of each other, this is what each part experiences:

To move the robot, we set up three variables:

We created a function called handleInput() called from the draw() function (which is called every frame). In that we used the keyIsDown() function from P5 to check for keys being held down. We made the left/right arrow keys move the body horizontally, the up/down arrow keys rotate at the shoulder and the Z/X keys to rotate at the elbow.

As always, the code can be downloaded from our GitHub repository.

This week we looked at creating a user-steerable snake in the style of the classic phone game.

The snakes head moves and the rest of the snake’s body is made up of places the head’s already been, up to a certain point. For this we use a JavaScript array (we’ve also called it a list at times).

We don’t want the snake’s length to grow indefinitely, so we have a maximum length. Once the list of stored locations gets larger than this, we use the JavaScript splice() command to remove the first (oldest) element from the list.

As always, all the code from our Creator group can be found on our GitHub repository.

This week in the Creators group we looked at emulating the classic toy, the Spirograph.

The Spirograph consists of geared plastic discs. One disc is fixed in place over a sheet of paper and the other, with a pencil tracing the path, is allowed to spin around it. The result is a complex and beautiful design on the paper.

Now, the pencil itself rotates around the centre of the black disc. Shouldn’t that make a circle too? Well it would if the black disc wasn’t moving. Thankfully though, it is and that’s what makes this interesting.

Finding the Location of the “Pencil”

So how do we find the location of the pencil? Let’s look at our diagram again, but with things re-labeled a bit: 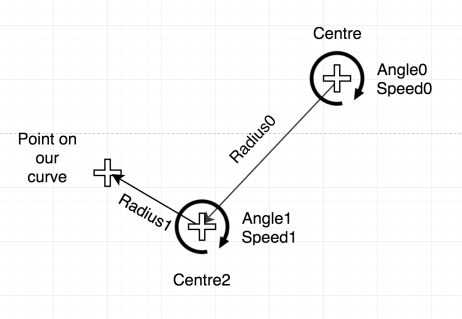 So at any time the location of our point is:

Given an angle and a distance, can we get a location?

The answer to this is a resounding “yes”! Look at the diagram: 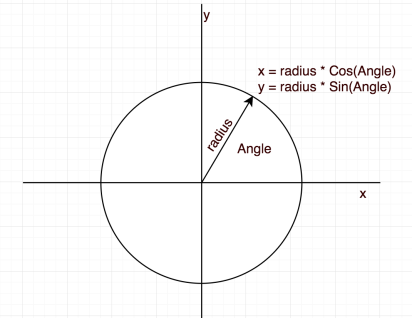 given an angle and a radius, we can calculate the X and Y position of any point around a circle. The magic is the COS and SIN (pronounced “kos” and “sign”) functions. These functions exist in almost all programming languages and JavaScript’s no exception.

The last big concept we tackled thus week was using P5js’s built-in vector class to store (x, y) points and make our code tidier. To make a vector we just use createVector(x, y). We can then use functions to add them together, etc. We would get the same result working with the X and Y values separately but the code is a lot neater and shorter.

As aways, all the code from our Creator group can be found on our GitHub repository.

This weekend in the Bodgers Group our three Raspberry Pi Pioneers teams continued to work on their projects.

The Zombie Herders were working on a PIR (passive Infra-red) sensor which is the type of sensor commonly found in burglar alarms.

They used the GPIOZero library for Python and sample code which can be found here. However they didn’t have much success so we need to do more testing on our sensor and if necessary order a new one.

The zombie trolls worked on creating a 3-D model for their project using FreeCAD which they will print out when we return after the break.

I’m afraid I not allowed to discuss what it will be used for at this point :-).

Team Green Fingers worked on more scripts for their project including using their Arduino and a relay to switch a 12 volt automobile bulb on and off.

As with most projects like this we had a little trouble getting it going as we forgot to set the pin we used on the Arduino as an Output. Thanks to James and his Dad for bringing in the 12 volt powerpack.

We are off for the next two Saturdays and we’re back again on the 11th of November.

See you all then

This week we mainly looked at three things:

Most of us had heard of a hard-disk before. This is a stack of metal disks inside your computer. Each metal disk has a special coating made of millions of tiny magnets (like you might find stuck to the fridge) that can be turned on and off. 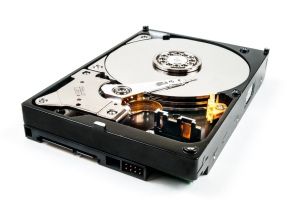 We also saw that the files on your disk are arranged with folders (also known as directories). Folders can contain both files and more folders. This allow us to keep our hard disk organised; without them all our files would be in the same place which would be difficult once we had more than a few. The location of a file is called its “path”. Looking at the highlighted file on the desktop of my Mac we can see the full path would be: 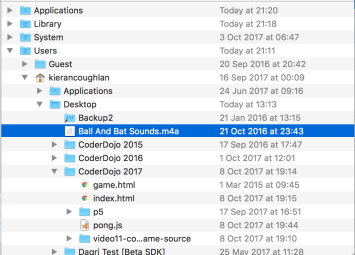 A function is a collection of commands that do a job together. We’ve already encountered them, even if you hadn’t especially noticed:

We could add all our code to start() and draw(), in fact, that’s what we’ve done before this week. That’s fine starting out, but it does mean, once there are a lot of commands in those functions, that our code is gets harder to read and understand. Breaking out a few commands into a new function and giving it a name that describes what it is doing, really helps.

Once we’ve written a function, it can be called as many times, and from as many places, we as need.

Functions can do one other thing too: they can give back a value to the place where they were called from. For this we use the special word return. For example, let’s see what a function to pick the largest of two numbers, we’ll call it Max(), might look like:

We give Max() the two numbers we are comparing. If the first one is bigger than the second, it gives back the first. Otherwise, if gives back the second. Note too that the names of the variables in Max() are different to those in start(), and that’s not a problem.

Finally, we looked at the P5 function random(). We used it two different ways:

As usual, all the code is on the creators github repository. Head there and download it!! The files for this week contain both the script we wrote (sketch.js) and a longer version that I wrote (sketch2.js). Feel free to take a look at both!

One of our ninjas was looking for a basic inventory system that he could use, so we knocked up something very quickly.

It’s all based on the standard .NET Dictionary class, documented here.

Dictionary allows us to store keys and associated values. In our specific case, our key is a string (the name of the item) and the value is an int (the count of items of that type).

This takes an item name. It looks to see if there’s an item of this name already in the inventory. If there is, it increases the count by one. If not, it adds it with a count of one. This cannot fail, so it doesn’t return anything.

This takes an item name. It looks to see if there’s an item of this name in the inventory and that its count is greater than zero; it’s possible that it’s listed there, but the count is zero. If there is, it decreases the count by one and returns true. If not, it returns false. The true/false return value allows us to test, when calling this method, if it succeeded, if that’s important to us.

This takes an item name. It looks to see if there’s an item of this name in the inventory. If so, it returns its count. If not, it returns zero.

So that allows us to add, remove and track an arbitrary number of items with very little effort.

The sample project also has a few other scripts. The intention is that the player picks up objects by moving over them. Pickup objects are tagged “PickUp”. The HandlePickup.cs script is added to the FPSController to detect moving over a pickup. Pickups have a PickupDetails.cs script attached. This automatically tags them “PickUp” and contains the items name (to use in the inventory). The project also has a FruitStealer.cs which removes one banana from your inventory every time you pass through its gate. It’s just there to show the RemoveItem method in action.

The files for this project can be found here.

Other small things of note about this project: the “bananas” and “apples” are animated, as is the UI-text containing the text “Fruit Stealer”. The material used for the Fruit Stealer is transparent.