I was away this weekend so Dave looked after the group.

He covered some basic electronics theory such as Ohms Law, how we use resistors in our circuits to protect other components and how to wire up an LED. He also helped the group build a simple traffic light circuit controlled by an Arduino which they then programmed. 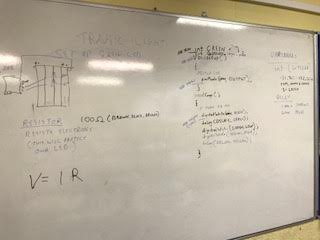 We have two sessions before the mid-term break so we will concentrate on coming up with ideas for our next projects and how we might implement these ideas and that will leave us a couple of weeks to get components etc. organized.

See you all next week.