During the same session at which we figured out how to translate joystick movements into motor signals for a robot with two drive wheels (https://coderdojoathenry.org/2019/02/24/hackers-how-to-control-a-robots-wheel-motors-based-on-joystick-movements/), we moved on to figuring out how to control the motor so as to steer an autonomous robot towards an object of interest.

Again, we did a bunch of calculations on a whiteboard (see end of post), and I have re-drawn them for this post.

This builds on the previous work, led by Kevin, on object detection in Python: https://coderdojoathenry.org/2018/12/06/hackers-starting-with-object-recognition/

We assume the setup is as follows:

The first three of these are illustrated below:

Our solution is to treat this as a variant of what we previously worked out before, where we had a joystick input, where the X direction of the joystick controls forward movement and its Y direction controls whether to move left or right. In this case, we are steering left/right while always moving forward. Therefore, X has a fixed value (X=1) and Y is a value that depends on the direction of the object of interest.

The equations we came up with are:

Then use X and Y to calculate the motor control values as before: 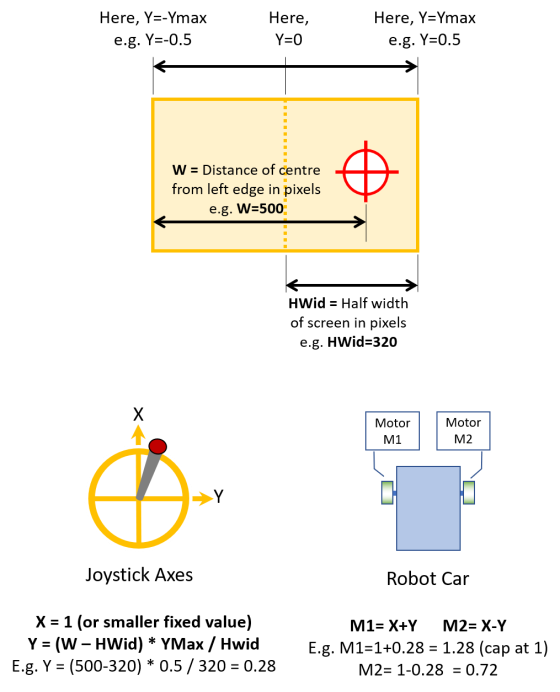 Here are our calculations on the whiteboard: