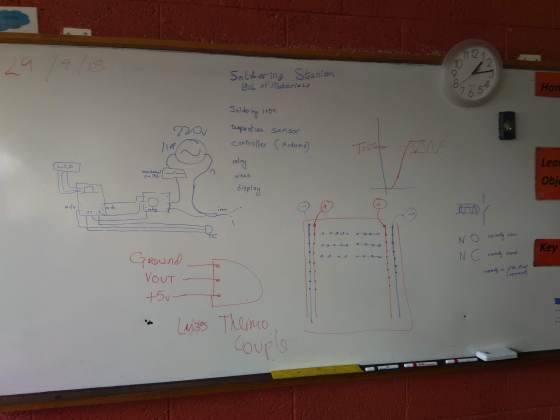 In Hackers, we started work on a short project for a temperature-controlled soldering station. As shown on the whiteboard above, the basic idea is:

As the whiteboard shows, this project also involved discussion of: wiring for the thermocouple; how breadboards are wired; normally-open vs normally-closed relay switches.

One group used a LM35 temperature sensor – here are its specs, and the group found it interesting to see how detailed and useful these data sheets are: http://www.ti.com/product/LM35

The other group used a potentiometer to simulate temperature, so they could test it working over its full range, as shown here:

Below is the code for reading and displaying the temperature. Next steps will be to integrate it with the relay.