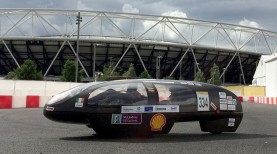 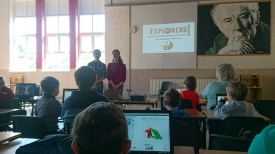 We were fortunate to be visited on 8 April 2017 by Ciara and Connor, two engineering students from NUI Galway who are part of the Geec team, building the Galway Energy Efficient Car – this is an electric car that a group of students have built from scratch, that is capable driving very long distances. For example, they estimate that it could cover the distance from Galway to Dublin for 14 cents worth of electricity!

Ciara and Connor both explained their roles in the project and answered many questions from enthusiastic members of CoderDojo Athenry. The CoderDOjo members found the Geec and its underlying technologies very interesting. It was fascinating to see that skills that many of them are learning (such as Arduino programming, soldering, and App Inventor) can be put to such great use.

A team, a project and a car. The Galway energy-efficient car (better known as the Geec) is an eco-car designed and built by engineering students from NUI Galway. In May 2015, we competed with 196 other teams at Shell Eco-marathon Europe, where every car was challenged to drive 16 km on a closed street circuit in Rotterdam using the least amount of fuel or energy. The Geec represented Ireland’s first ever attempt in this definitive global ultra-efficiency event. We finished in the top half of the leaderboard in prototype battery-electric class, with a score of 287 km/kWh – roughly equivalent to 8,000 miles per gallon for a petrol or diesel car.

The talk covered the basics of how the car has been designed, built and tested, with the main focus on the electronics and software involved in the car.

Ciara is a final year Electronic and Computing Engineering student in NUIG. Her role on the Geec team is to implement the Data Acquisition and Display system. The system collects data from sensors on the car and then has to accurately display them in real-time to the driver. All the data is used to write out driving strategies for the marathon. It entails designing, testing and building a circuit with various sensors, an Android app to display the data to the driver and a logging system to save the data for further analysis.

Connor is a final year student studying Electrical and Electronic Engineering in NUIG. His role on the GEEC team is designing the power electronics system, which delivers power from the battery to the motor. This involves both software and hardware, with an Arduino being used as the interface between the electrical and virtual sides of the system.