This week we did a review of everything we’ve covered so far in Unity this year. It was a really usefully exercise as we ramp up to doing our own projects. People talked about their project ideas and I even got so see a few things running. I was impressed with the ingenuity and inventiveness. As I explained, over the coming few weeks, I won’t be presenting much in the way of new material. We will instead concentrate on getting our projects running and polishing them to the best of our ability.

I presented a couple of small sample projects intended to inspire game project ideas. The first was a top-down, single-keyboard, two-player game where two cars complete to drive a ball into their opponent’s goal area. If this sounds familiar, then you’ve heard of Rocket League. This low-rent version I dubbed “Sprocket League”. It can be downloaded from here. It uses the car from Standard Assets, slightly modified to allow the input axes to be defined in the inspector so that each can be controller independently. The red car uses the arrow keys and the blue keys uses WSAD for movement. To make it into a full game some means of keeping score and timing the game would be needed. 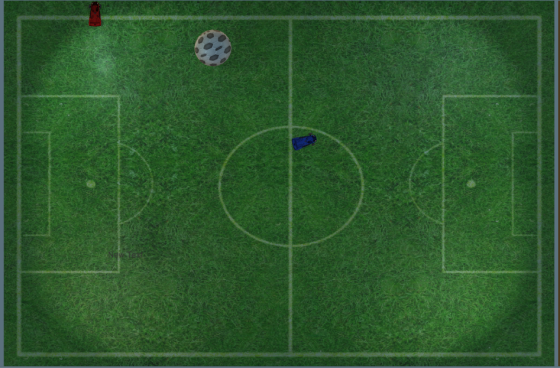 I also posted a basic sliding tiles game based on 2048. It is intended to show that we can achieve a 2D game appearance, even while using the 3D elements we have been working with. Although the basic game mechanics are there, it would ideally need a lot of work to bring it up to a reasonable standard. The real game provides a lot more visual feedback to the user than this version. Again, it can be downloaded from here. For those that recall, my broken attempt at making the tiles animate can be enabled via the “Show Me The Broken Movement” checkbox on the GameController object. 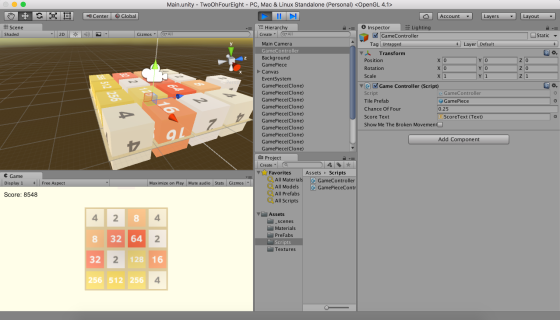 Best of luck working on your projects over the next two weeks and I’ll see you all when we return!