Hey folks, we had a quite complicated session this week which discussed a lot of new concepts. 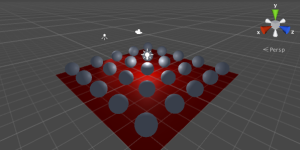 The screen, and by extension, the camera which draws into that screen has an aspect ratio. This is defined as the width divided by the height. For example, a standard 1080p HD screen of has 1920 x 1024 pixels. This is an aspect ratio of 1.875. Our aspect ratio depends on how we’ve sized our game panel.

The code we showed the last day tries to position the camera at the average position between the tanks and size it so that both tanks fit in at the same time.

One unusual thing  that it does is to ensure smooth movement of the camera by not jumping it instantly to the place we want it to be, or the size we want it to be, but rather using the Vector3.SmoothDamp() method. This method allows us to specify two vectors, one representing the current value and the second representing value we’d like to get to, and returns a vectors that is someway from the first to the second such that it gives a smooth, as opposed to sudden or jerky, movement:

I’ve completed the health bar, as promised, and we won’t be doing that at Dojo. Just download the up-to-date project file from here, and we will start with it next week.

Remember to be working on your own projects! See you next week.