Movies are lots of single pictures shown very quickly one after the other.

Most movies run at 24 pictures a second!!

We can do the same in Scratch.

Question: If there are 24 pictures in one second, how long is each picture shown for?

You should have come up with something like this…

And we can code this in scratch like this: 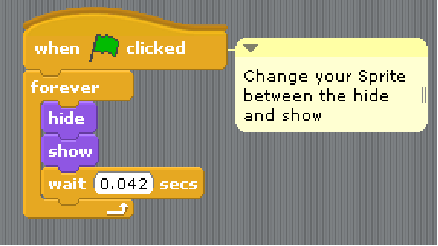 And to keep things nice and neat, we can use a Broadcast to tell the Sprite to move

Now you don’t need to change this code anymore…

So what kind of Sprite  are we going to have and how will it move?

Well for this demonstration we are going to use a Wheel, it can be of any style, but one with spokes works best to demonstrate the Wagon Wheel effect.

Wheels, are circular 🙂 and circles have 360 degrees, if a wheel turns a full 360 degrees between each frame, then it will appear to stand still.

Some more Maths! Depending upon the number of Spokes in your wheel you can get different effects.

Lets start with one Spoke!

And to make things interesting we will create avariable so we can turn it by different degrees quite easily.

So we set it up to recieve the broadcast from the Movie Machine and turn round by a certain amount each time.

In the example above I have used the variable, but you don’t have to you can just put in a number.

Try the following numbers and see what effect you get:

And if you want to get real fancy and use a variable, you can add the variable, and the following code to adjust whilst the program is running.

Try numbers very close to the ones above…

Remember the games we did last year? You could add a spinning ball…