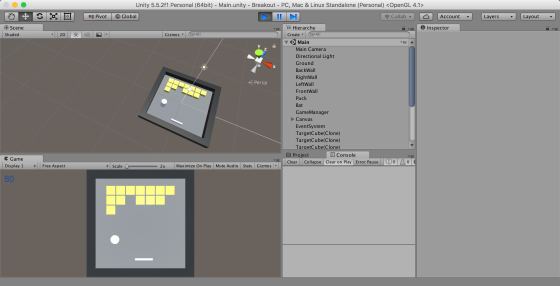 This week we looked at a version of the classic game Breakout. It was an exercise in showing how a game developed with 3D assets can, nevertheless, appear like a 2D game given the correct choice of camera and lighting.

The camera for this game is an orthogonal one. Unlike a standard perspective camera, which mimics how we actually see the world, things don’t get smaller as they get further away with an orthogonal camera. This gives a very flat look where we don’t see the edges of the game area, blocks, bat or puck. In addition, the scene has a single directional light which shines directly downwards. Shining straight down means there are no shadows around the sides of the objects as there would be if the light was at an angle.

This game does not use Unity’s physics for the puck movement. I found that the physics just didn’t give the consistent behaviour you’d expect from this game. Accordingly, I programmed the movement of the puck myself. The maths is a little more complex than I’d like but the intention is to keep the puck moving at a constant speed, even after it hits something.

Additionally, we worked quickly on implementing a mouse controlled camera. In the hierarchy, we created a camera rig from two empty objects, one inside the other, and put the camera object inside the second. Changing the Y rotation of the first empty then turned the camera around the vertical while changing the X rotation of the second tilted the camera around horizontal. The visual below show what a real world camera rig that behaved this way might look like; rotating at the base and at a horizontal pivot. 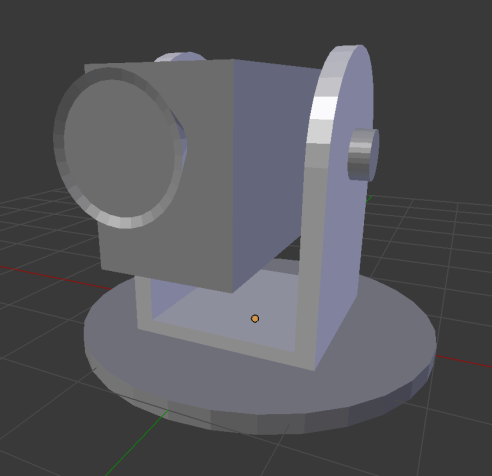 In our scripts we referenced the usual horizontal and vertical input axes:

but in the Input Manager (Edit|Project Settings|Input) we switched these from the arrow keys to the mouse axes: